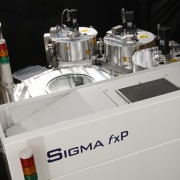 YAVNE, ISRAEL | ORBOTECH LTD. (NASDAQ: ORBK), today announced that SPTS Technologies, an Orbotech company and supplier of advanced wafer processing solutions for the global semiconductor and related industries, has received orders totaling approximately $57 million in value for multiple Sigma fxP PVD systems from a global manufacturer of packaged die.  The systems will deposit under bump metals and redistribution layers (RDL) for Fan-Out Wafer Level Packaging (FOWLP) production.  System deliveries and revenue recognition are expected to commence in the fourth quarter of 2015 and continue throughout the first half of 2016.  Orbotech’s fourth quarter and full year 2015 revenue guidance included the initial revenues expected to be recognized from these orders during this period.

According to a report entitled “Fan-Out WLP Forecast: Update 09/2015” published by research firm Yole Développement in September 2015, the launch of TSMC’s InFO format is expected to increase industry packaging revenues for FOWLP from $240M in 2015 to $2.4B in 2020.  With a projected 54% CAGR, Yole expects FOWLP to be the fastest growing advanced packaging technology in the semiconductor industry.  The burgeoning market for thinner smart phones, tablets, wearable devices and Internet of Things (IoT) connected consumer goods has created a significant need for this cost-effective high density format.   There are numerous FOWLP platforms in or near production from many companies including eWLB (STATS ChipPAC, NANIUM and ASE), SLIM & SWIFT (Amkor), InFO (TSMC) and RCP (Freescale). As part of Orbotech, with its multiple touch points throughout diverse electronics manufacturing environments, SPTS plays a key role in FOWLP advanced packaging solutions with numerous customer installations.

“This groundbreaking multi-PVD system order, the first from any semiconductor manufacturing company for FOWLP, is a ‎milestone moment for advanced packaging,” said Mr. Kevin Crofton, President of SPTS and Corporate Vice President at Orbotech. “It marks the beginning of an industry-wide transition of FOWLP from a niche packaging technique for small devices such as RFID and power management ICs to mainstream architecture for high value chips.  We expect FOWLP to become the leading low cost, high density packaging format.”

This order reinforces advanced packaging as SPTS’ most important growth driver.  During 2015, the company has received multiple new technology orders from packaging fabs for a range of applications including plasma dicing for frame-supported wafers, through-silicon via etch and deposition for 3DWLP and TSV reveal and passivation as announced by imec on July 14, 2015.

Orbotech Ltd. (NASDAQ:ORBK) is a global innovator of enabling technologies used in the manufacture of the world’s most sophisticated consumer and industrial products throughout the electronics and adjacent industries.  The company is a leading provider of yield enhancement and production solutions for electronics reading, writing and connecting, used by manufacturers of printed circuit boards, flat panel displays, advanced packaging, micro-electro-mechanical systems and other electronic components.  Virtually every electronic device in the world is produced using Orbotech systems.  For more information, visit http://www.orbotech.com/.

Except for historical information, the matters discussed in this press release are forward-looking statements within the meaning of the U.S. Private Securities Litigation Reform Act of 1995.  These statements relate to, among other things, future prospects, developments and business strategies and involve certain risks and uncertainties.  The words "anticipate," "believe," "could," "will," "plan," "expect" and "would" and similar terms and phrases, including references to assumptions, have been used in this press release to identify forward-looking statements.  These forward-looking statements are made based on management's expectations and beliefs concerning future events affecting Orbotech and are subject to uncertainties and factors relating to Orbotech's operations and business environment, all of which are difficult to predict and many of which are beyond the Company's control.  Many factors could cause the actual results to differ materially from those projected including, without limitation, timing and extent of achieving the anticipated benefits of the acquisition of SPTS; Orbotech's ability to effectively integrate and operate SPTS's business, the timing, terms and success of any strategic or other transaction, cyclicality in the industries in which the Company operates, the Company's production capacity, timing and occurrence of product acceptance (the Company defines 'bookings' and 'backlog' as purchase arrangements with customers that are based on mutually agreed terms, which, in some cases for bookings and backlog, may still be subject to completion of written documentation and may be changed or cancelled by the customer, often without penalty), fluctuations in product mix, worldwide economic conditions generally, especially in the industries in which the Company operates, the timing and strength of product and service offerings by the Company and each of its competitors, changes in business or pricing strategies, changes in the prevailing political and regulatory framework in which the relevant parties operate or in economic or technological trends or conditions, including currency fluctuations, inflation and consumer confidence, on a global, regional or national basis, the level of consumer demand for sophisticated devices such as smartphones, tablets and other electronic devices, the timing for a verdict in the ongoing appeal of the criminal matter and ongoing investigation in Korea, the final outcome and impact of this matter, including its impact on existing or future business opportunities in Korea and elsewhere, any civil actions related to the Korean matter brought by third parties, including the Company's customers, which may result in monetary judgments or settlements, expenses associated with the Korean matter, ongoing or increased hostilities in Israel and other risks detailed in the Company's SEC reports, including the Company's Annual Report on Form 20-F for the year ended December 31, 2014, and subsequent SEC filings. The Company assumes no obligation to update the information in this press release to reflect new information, future events or otherwise, except as required by law.

Some of the materials contained on this website (including in press releases, webcasts, presentations, posts and other places) contain forward-looking statements and are subject to the Safe Harbor provisions created by the U.S. Private Securities Litigation Reform Act of 1995. These statements relate to, among other things, future prospects, developments, business strategies and industry trends and involve certain risks and uncertainties. The words “anticipate,” “believe,” “could,” “will,” “plan,” “expect” and “would” and similar terms and phrases, including references to assumptions, have been used in this website to identify forward-looking statements. These statements are only predictions and actual events or results may differ materially. We refer you to the documents KLA Corporation (“KLA”) files from time to time with the Securities and Exchange Commission, specifically, KLA’s most recent Annual Report on Form 10-K and Quarterly Reports on Form 10-Q.  These documents contain important factors that could cause the actual results to differ materially from those contained in projections and other forward-looking statements including, among others, volatility and cyclicality in the semiconductor equipment industry and other industries in which KLA and its subsidiaries operate, potential fluctuations in operating results and stock price, international trade and economic conditions, the ability to compete successfully worldwide, management of technological change and customer requirements, fluctuations in product mix within and among divisions, the timing and strength of product and service offerings by KLA and its subsidiaries and its and their competitors, intellectual property obsolescence and infringement, and factors associated with key employees, key suppliers, acquisitions, and litigation. Additional factors impacting the business of KLA and its subsidiaries include integration between KLA and its acquired companies, ability to achieve synergies and other benefits of acquisitions in the timeframe anticipated, if at all.

This site is provided by KLA (or its subsidiaries) on an "as is" basis. None of KLA and its subsidiaries make any representations or warranties of any kind, express or implied, as to the operation of the site, or the accuracy or completeness of the information, content, materials, pricing, services, or products included on this site. Product specifications and prices are subject to change without notice, and products may be discontinued without notice. None of KLA and its subsidiaries will be liable for any damages of any kind arising from the use of this site, or the material that is provided on this site, including but not limited to direct, indirect, special, incidental, punitive, or consequential damages.

Following KLA's acquisition of Orbotech in 2019, we are starting to transition this website to kla.com.