Today’s automotive industry is changing at an incredibly fast pace, moving from combustion engine-based designs with human drivers to driverless, electronics-based systems. This automotive transformation presents some clear electronic design challenges in the inevitable shift toward the design and production of semi- and fully autonomous vehicles.

At the electronic component level, miniaturization will be achieved in part by hi-density interconnect (HDI) technology. HDI – a mature technology previously adopted by early smartphone manufacturers – will now enable automotive designers to make both semi- and fully autonomous vehicles a reality, while preserving valuable PCB real estate for additional componentry.

It’s a growing market. The global HDI PCB market generated $9.49 billion in sales in 2017, and is expected to reach at $22.26 billion by 2025, growing at a compound annual growth rate (CAGR) of 11.1% from 2018 to 2025, according to a recent report by Allied Market Research. The consumer segment, including laptops, smartphones, tablets, and wearables, digital cameras and other devices, accounted for the highest share of 42% in 2017. “In the near future, increasing utilization of HDI technology in automobiles is expected to provide lucrative opportunities for the growth of the global HDI PCB market,” the report said.

For automotive electronics, a key design challenge is to shrink the physical footprint of embedded systems, while simultaneously fulfilling the demand for unprecedented connectivity, electrification, infotainment, and autonomous driving capabilities. HDI can help.

Below is a slideshow about how automotive designers will be thinking about HDI.

Why HDI Technology is Critical to Autonomous Vehicle Success 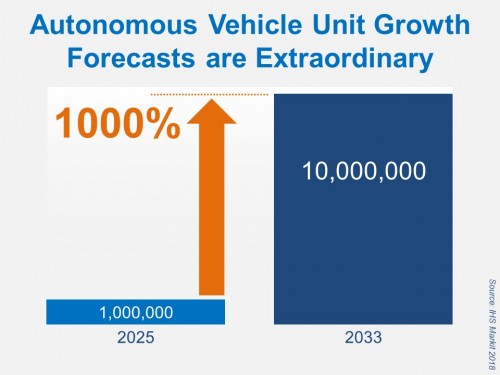 The number of Society of Automotive Engineers (SAE)-defined Level 4 and Level 5 autonomous vehicles is expected to increase exponentially, from one million to 10 million units in the space of eight years. This 1,000% increase is forecasted to take place between 2025 to 2033.

L4 and L5 autonomous vehicles are defined as high automation and complete automation, respectively. Level 4 autonomy requires limited human attention – vehicles are capable of processing, acting and reacting to events, such as steering, braking, accelerating, monitoring the vehicle and road, changing lane safely, turning, using signals and so on. At Level 5, no human attention is required. The car controls all critical tasks and is capable of processing and deciding how to react in highly dynamic driving situations such as traffic jams and merging onto a highway. 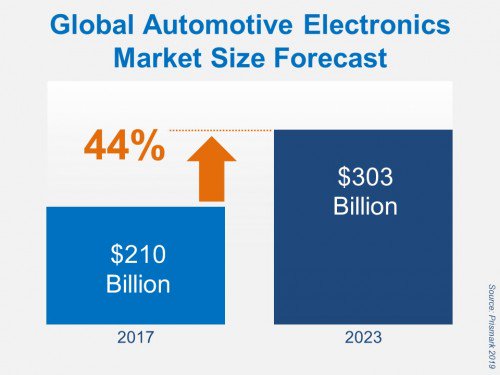 Not surprisingly, the market for automotive electronics is growing to support traditional vehicles’ transformation from a mechanical to electronics-based design. 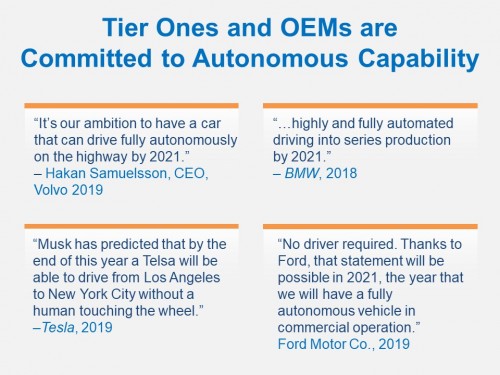 These aggressive forecasts are reinforced by global car and electronics manufacturers committing to autonomous vehicle technology* through acquisitions and development. 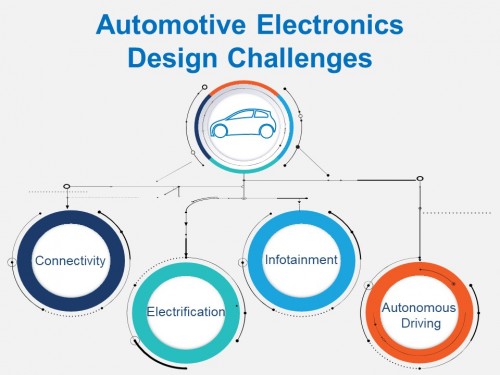 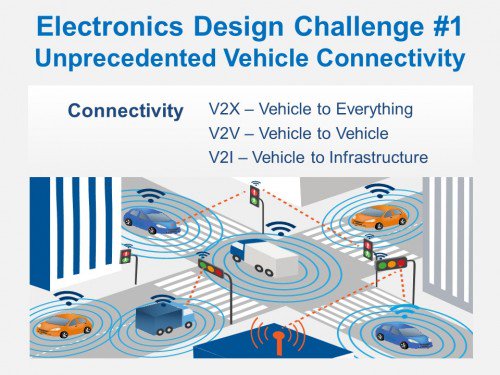 Seamless connectivity must be assured in a semi- or fully autonomous vehicles. Technologies for connectivity enable vehicles to receive information from other vehicles and other sources to augment information collected by on-vehicle sensors (such as RADAR, LIDAR, cameras, and ultrasonic) which enables the car to drive itself. Connectivity is based on transmitting and receiving high amounts of data over radio frequency (RF). 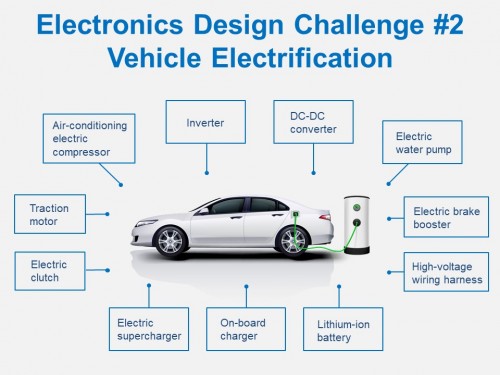 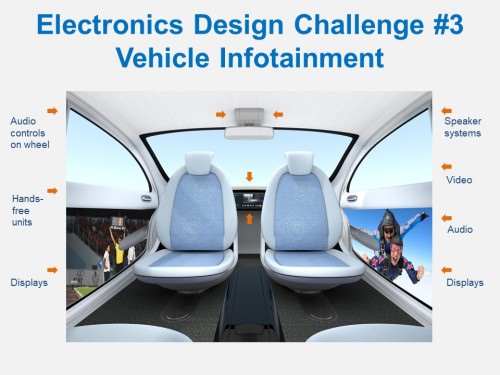 The infotainment possibilities will be driven by the increased sophistication of technology and the new leisure time for the “drivers.” 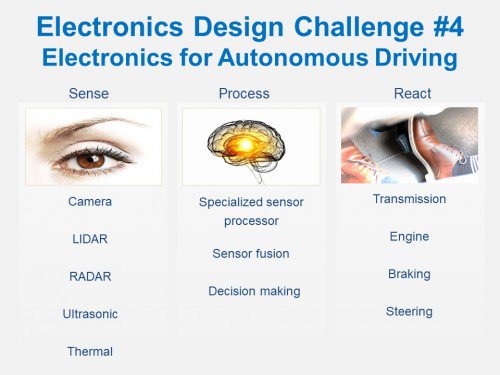 Intelligent, autonomous vehicles will need to process extraordinary amounts of data to execute true self-driving capability. According to an Intel executive, the components used in autonomous vehicles – cameras, RADAR, sonar, GPS and LIDAR and many other small, high-functionality devices – could see each vehicle generate as much as 4,000 GB of data per day!* 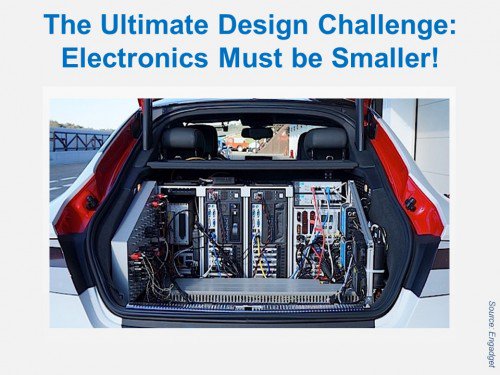 Autonomous electronics can no longer occupy the entire trunk as some early versions do today. We need to add all the functionality, but it needs to be much smaller and better integrated. The only option is to make the electronics in a smaller form factor, which brings us to the distinct contribution of HDI technology. 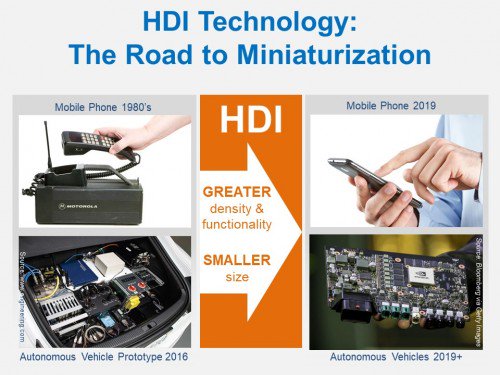 User demand drives design and production innovation. Early mobile phones weighed 2.5 pounds (1.5g), were ten inches long, and had a phone battery life of 30 minutes before needing to be recharged for 10 hours, a significant “mobile” contrast to the sleek smartphones we use today. Many innovation cycles later, the new mobile phone is not only extremely thin by 1980s phone standards, but it includes a lot more functionality including displays, RF connectivity, etc. This technology evolution of size miniaturization in concert with increased function is not dissimilar to today’s autonomous car’s technology trajectory.

Hi-density Interconnect PCB technology or HDI took the early mobile phone from its larger predecessor to the small phone we have today. It now is enabling the same capability for autonomous vehicle designs that require more function per unit area in a dense, lightweight, and smaller form factor. 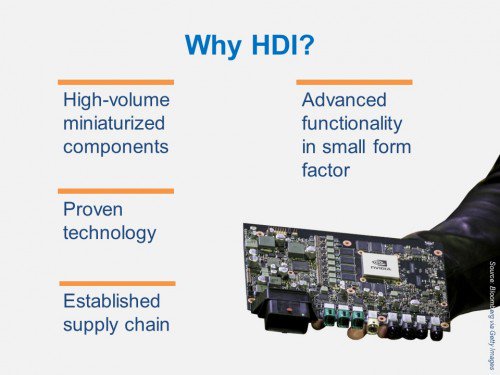 HDI enables reliable, compact designs that provide advanced functionality in a dense, small form factor, ultimately responding to the performance needs of autonomous vehicles. In addition, for manufacturers challenged with delivering cost-effective and market-ready autonomous vehicles, this proven and tested solution has a demonstrated ability to be manufactured in high volumes and has an established supply chain which can drive competitive pricing and higher yields.

Following KLA's acquisition of Orbotech in 2019, we are starting to transition this website to kla.com.