Newport, United Kingdom – SPTS Technologies, a supplier of advanced wafer processing solutions for the global semiconductor industry and related markets, today announced that it has won the “Best Process” Award for its blanket silicon etch process using its Rapier XE system at the 2014 3D InCites Awards held in San Francisco during SEMICON West 2014. 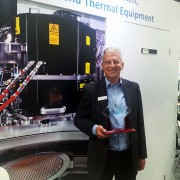 Dave Thomas with 3D InCites Award 2014Dave Thomas, Marketing Director at SPTS commented, “The Rapier XE significantly lowers costs and increases yields for device manufacturers utilizing through-silicon vias. Higher etch rates benefit throughput and cost of ownership – both which are very important to customers. We are very happy to have won this award, as it is recognition by independent industry judges of the benefits of our Rapier XE system.”

Launched in May 2014, the Rapier XE has been developed to improve etch rates and uniformities for blanket silicon etches on 300mm wafers for via reveal applications. Via reveal is a 2.5D/3D technology, where the back of the wafer is etched to reveal the tips of the Cu filled vias, ready for bumping. The system also allows recipe-controlled tuning of the etch profile to compensate for residual thickness non-uniformities introduced in earlier etch and grinding steps.

In addition, the Rapier XE supports SPTS’ ReViaTM, the only end-point technology that can detect the Cu tips as they emerge from the Si surface. Collaborative work with imec has shown significant savings can be realized by controllably reducing via height to ~1µm. This means that subsequent dielectric thickness and CMP removal times can be reduced, which significantly reduces costs.

The winners were chosen by a panel of technical judges, and a public online vote also carried out. Across the five categories, SPTS was the only company who won both the online poll and the judge’s award in their category.

For more details about the 3D Incites Awards and the various charities supported by the program, please go to http://www.3dincites.com/3d-incites-awards/.